The 2000s real estate bubble—which burst in 2007 and precipitated a once-in-a-century financial crisis and recession—is not something most folks are excited to see repeated. But five years of declining or stagnating housing prices, the market turned around big time in 2012, making some analysts worry that we’re seeing the beginnings of Housing Bubble 2.0. 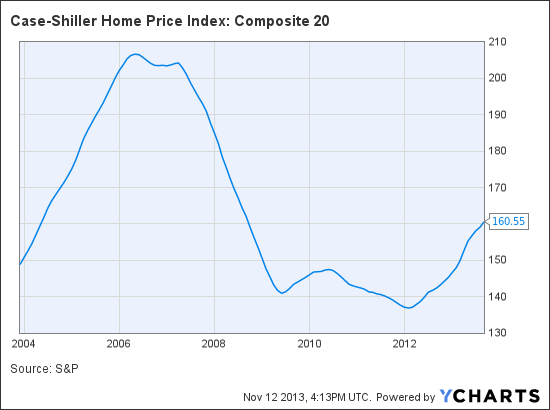 As you can see, home prices in most of the country are far from the bubble levels of mid-2000s, but if you drill down deeper to look at individual markets, one sees a different picture. Jed Kolko, housing economist with the real estate site Trulia, has been tracking home prices across the country to see which markets are over and undervalued. In a forthcoming “Bubble Watch” report, he finds that while most of the U.S. real estate market remains significantly undervalued, there are certain markets that are straying into bubble territory.

According to Kolko’s analysis, which looks at several factors like price-to-income ratio, the price-to-rent ratio, and prices relative to their long-term trend, markets in Orange County California and Los Angeles are more than 10% overvalued. Kolko also pegs the Austin, Texas market at 10% overvalued, while 7 other markets range from 4% to 7% overvalued. Those include:

Unsurprisingly, these markets — concentrated in Texas and California, have also seen double digit home appreciation over the past year, with Orange County real estate appreciating a whopping 23.4% since October of 2012.

So are we in danger of another housing bubble like we experienced last decade? Not quite yet, at least nationally.  According to Kolko, the market remains roughly 4% undervalued overall. And in some markets, like Cleveland, Ohio and Palm Bay-Melborne-Titusville, Florida, home prices are still 20% below their fundamental value. Furthermore, even the most frothy markets are less overvalued than the national market was in 2004, when home prices were 24% overvalued nationally.

(MORE: 5 Things You Should Absolutely Never Put on a Resume)

That being said, these numbers are evidence that policies like the Federal Reserve’s quantitative easing program, which have driven mortgage rates to historical lows, are encouraging buyers to snap up homes aggressively in certain markets. And some real estate analysts like housing market veteran Mark Hanson think that analyses like Kolko’s are too optimistic. Writes Hanson:

When comparing house prices and affordability today vs the bubble years people make a critical error.  That’s, they don’t “normalize” the bubble years metrics to account for the fact that the incremental buyer/refinancer used “other than” 30-year fixed mortgages.  In other words, they forgot about the popularity of “exotic loans” and assume everybody always used market-rate 30-year fixed rate financing.

In other words, the world has changed. Young folks can’t afford to leave their parents houses. Even the ones who can aren’t getting mortgages because credit is much tighter than it was in the pre-bubble years, and recent price increases have been fueled by over-enthusiastic investors rather than true economy-wide demand for housing. Every real estate analyst is forced to used assumptions when forecasting the future prices of homes, and given the fact that home price appreciation in California has slowed in recent months, Hanson may be going to far in arguing that markets like California are a full-blown bubble.

But a California-centered bubble is certainly a possibility, and even Kolko’s more nuanced analysis argues for buyers in some of the more frothy markets to approach with caution. One of the enduring lessons of the last real estate bubble is that while there are many reasons to buy a house — like the tax-deductibility of mortgage debt, the forced savings mechanism of paying a mortgage, and the pride of homeownership — expecting significant appreciation in your home’s value shouldn’t be one of them.