The housing market is back, right? For well over a year now, housing prices nationally have been appreciating at a rapid pace, with some markets like Dallas and Denver recently touching all-time highs. Overall, housing prices are still below their pre-crisis peak, but they’ve made up much of the ground they lost. What’s curious, however, is why that hasn’t lead to home builders building more homes. 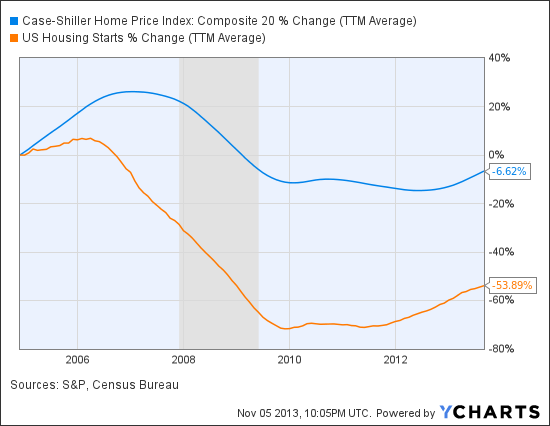 As you can see from the chart above, homes are still slightly less valuable than they were ten years ago during the go-go days of the housing bubble. But new construction of homes (called housing starts) absolutely bottomed out during the crisis, and remain more than 50% below their pre-crisis levels. This is the main reason why — as my colleague Rana Foorohar has explained — rising home prices haven’t actually been a driver of economic growth. After all, the existence of expensive homes is usually the effect of a healthy economy rather than the cause. Expensive housing will motivate home builders to ramp up production, creating good-paying jobs for the sort of workers who need them most in this economy.

The problem? According to Jed Kolko, a Chief Economist at Trulia, rising prices are the result of investors snapping up cheap homes, as well as tight inventory as banks try to keep vacant lots off the market in anticipation of a better market down the road. “There’s been an unusually low number of homes actually listed for sale,” says Kolko.

But if you look beyond just the raw price data, the housing market, and the economy in general, look pretty weak. The Census Department yesterday released data that showed that the U.S. only created 380,000 new households — meaning one or more people that occupy a distinct housing unit — over the past year. That’s far below the 1.1 million new households the U.S. usually creates each year, and is a big reason why homebuilders aren’t falling over themselves to build new homes. This is a problem that’s been with us ever since the recession, Kolko says, and it’s driven by a weak economy that’s especially bad for young Americans who normally do the bulk of new household formation. “Young adults had a severe recession, and an unusually high percentage of them are living with their parents instead of forming their own households,” Kolko says.

One data point that illustrates how bad it is for young adults is the employment-population ratio for folks ages 25-34. This is a better measure than the unemployment rate because it measures those who have dropped out of the the labor force for lack of any decent job opportunities, or to go back to school. 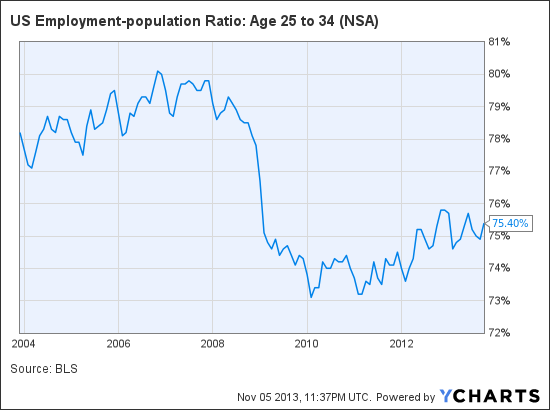 US Employment-population Ratio: Age 25 to 34 data by YCharts

As you can see, for young people, we’re much closer to the depths of the recession than we are to pre-crisis employment levels. For homebuilders to really ramp up production, young adults are going to have to find good jobs and leave their parents’ homes.