Few assets performed worse than gold in 2013, as investors fled the precious metal due to an improving U.S. economy and continuing low inflation. Most forecasters believe these factors would only continue to put downward pressure on the price of gold in 2014, but the metal has been defiant in recent weeks, rising to a two-month high yesterday of $12.50 per ounce: 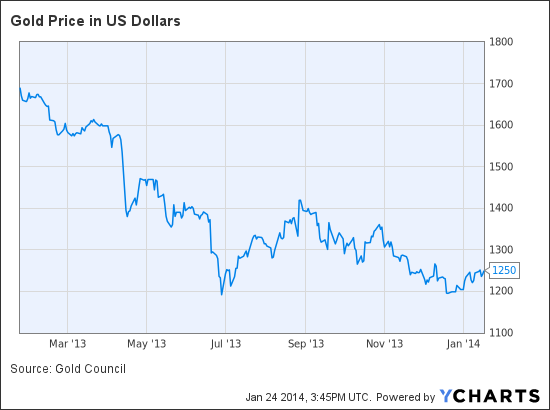 Gold Price in US Dollars data by YCharts

As you can see, gold has a way to go before it recovers the losses suffered in last year’s collapse. But does the recent uptick represent the beginning of a rally or a chance to get out? According to Sameer Samana, a strategist with Wells Fargo Advisors, it’s the latter. Samana writes that gold saw an unprecedented run up in price following the bursting of the tech bubble in 2001—a trend that was motivated by falling interest rates and yields on corporate and government bonds. Smaller returns on those assets forced investors to look for alternatives.

Smaller returns also motivated investors to sell their dollar-denominated assets and look overseas for stronger investments. This dynamic led to a cheaper dollar, which also boosted the price of gold relative to the dollar. But those trends, of a weaker dollar and low-interest rates, have reached their end, and in 2014 and beyond a recovering U.S. economy and rising interest rates will make gold a bad bet. Writes Samana:

“Historically, bounces in markets that are in downtrends tend to be shallow while declines tend to be sharp and significant. So far in 2014, gold and silver have enjoyed modest price rebounds but, given our outlook for a further downtrend, we recommend investors use the slight bounce in prices to eliminate exposure to this sector.”

How poorly will gold perform in 2014? No one knows for sure, but earlier this month Jodie Gunzberg, Vice President, Commodity Indices at S&P Dow Jones Indices tackled this very question. The last time gold had as tough a year as 2013 was 1981, when the precious metal lost 32.8% of its value, she points out. Gunzberg writes:

So is there a bullish case for gold in the short-term? One point gold boosters point to is strong demand for the metal in Asian countries like China, India and Japan. Also, cheap gold prices may cause unprofitable gold mines to close, limiting the supply of the metal and supporting the price of gold. But gold investing isn’t for the faint of heart, and if you’re sick of trying to predict how investors will feel about this wildly unpredictable investment, the recent bounce might be a good time to get out.