McDonald’s, the world’s largest burger chain, had an impressive run from 2004 to 2011, when the fast food retailer posted average global same-store sales growth of 5.6% per year and tightened its hold on burger lovers from Boston to Beijing.

But the past few years have not been so kind. The company once again released a disappointing earnings report Thursday, stating that same-store sales actually fell globally in over the past three months. While a generally weak economy has convinced many consumers to pull back on their restaurant spending, the burger giant has made a number of missteps (see below). Its performance has been in stark contrast with number two burger chain, Wendy’s. Consider how the two stocks have performed over the past year: 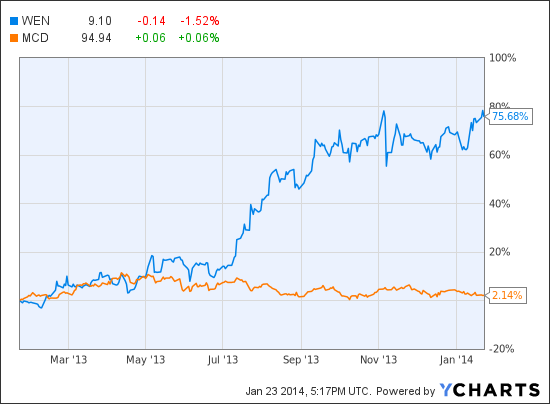 Of course, even with a few years of sluggish growth, you’d rather be in McDonalds position than Wendy’s, all else being equal. McDonald’s yearly sales swamp those of Wendy’s—$27.5 billion to $2.5 billion. But Wendy’s has been growing its sales and profit, while McDonalds performance has been stagnant. Here are three reasons why this one-time also ran is nipping at McDonalds heels:

1. Premium Products: With low income folks struggling in today’s economy, fast food chains have to go after the more affluent in order to achieve sales growth. Wendy’s has done this by offering a series of limited-time only premium products, like the bacon cheeseburger on a pretzel bun, and the bacon portabella melt on a brioche bun. These premium products can grab the attention of more discerning eaters and get them hooked on Wendy’s permanent menu items.

2. Service: McDonalds has tried its own series of new menu items, including Premium McWraps, Egg White Delight McMuffins, blueberry pomegranate smoothies, just to name a few. But the slew of new products significantly slowed down service times as workers struggled to deal with assembling them quickly and efficiently. A recent study by the trade publication QSR magazine did a study of how long it took the average customer to make it through various fast food restaurants drive through service. The result? McDonald’s experienced its slowest average speed of service in the history of the study.

3. Better Instincts: If your new products are going to slow down service, they’d better be a hit with customers. Most of McDonald’s new products from its  Fish McBites to a new offering of chicken wings, fell flat. Wendy’s, on the other hand, put all its chips in a few products, most notably the pretzel bun, which were a huge hit. At the end of the day, success in fast food is going to be primarily about anticipating what will resonate with your customers.