The October jobs report came as a bit of surprise for analysts who were expecting the government shutdown to severely affect job growth, as the Labor Department announced the economy added a pretty robust 204,000 new jobs in October. That’s on top of upward revisions of job-growth estimates in September and August, which showed the economy supported 60,000 more jobs than previously thought.

These headline numbers can be a bit misleading however, and there are numbers deeper in the report that suggest that the shutdown had a pretty significant effect on the economy and employment. Furthermore, there’s plenty of evidence that shows that shutdown or no, the labor market simply isn’t recovering from the biggest issues facing it today.

What were the most worrying indicators? Though the unemployment rate has fallen quickly over the past couple years, much of that decline is due to workers dropping out of the labor force altogether. That trend continued with this report, as the labor force participation rate declined by 0.4% to the lowest level since 1978: 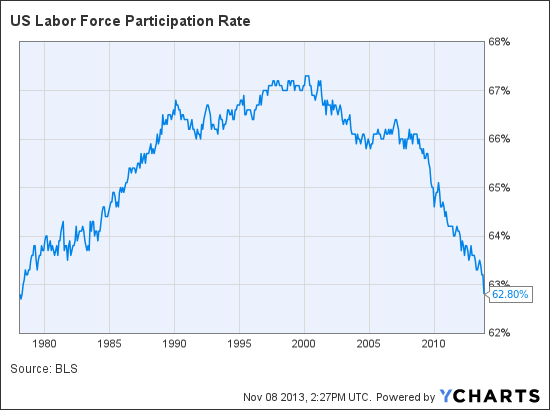 Another related figure to keep an eye on is the employment-population ratio. This can be a more informative measure of the labor market than the unemployment rate because it ignores the question of whether someone should be considered in or out of the labor market. Though we should generally expect this to decline as our workforce continues to age overall and a greater share of our population is retired, older folks, you can see in the chart below that we’re a long way from recovering from a decline in this number that was clearly a result of the financial crisis. This number also fell in today’s report. 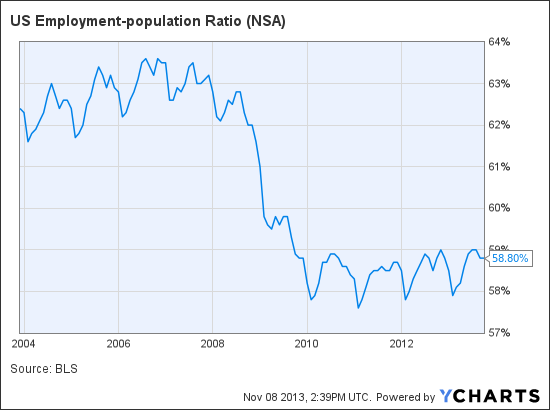 US Employment-population Ratio data by YCharts

It’s quite possible that the bad news contained in these metrics will reverse in the November survey once the Labor Department is conducting its survey under normal conditions and federal workers and contractors are all back on the job. But it’s also possible that the second-order economic effects of the shutdown haven’t even been picked up in the data yet. Here’s economist and Brookings Institution Senior Fellow Justin Wolfers on Twitter this morning:

This was a strong MONTHLY number. But there's plenty of damage the shutdown may have done at the end of the month or after reference period.

Lastly, when you take a step back and look at the long-term trends employment trends in the economy, we’re simply not adding enough jobs to get the economy back to full strength any time soon. So far this year, we’ve seen an average of roughly 186,000 new jobs per month. We averaged 175,000 and 182,000 jobs per month in 2011 and 2012 respectively. If the pace of job growth is accelerating at all, it’s doing so only very slightly.

Four years into the recovery, we’re sill more than 1.5 million jobs short of peak jobs in 2008, and that’s after years of population growth. Adding more than 200,000 jobs in any given month is pretty good news, but any sober look at the bigger picture says it’s nowhere near good enough.